Tag: Woman Walking Ahead: in search of Caroline Weldon and Sitting Bull 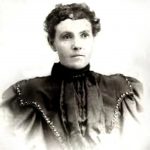 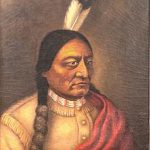 Woman Walks Ahead, 2018, 101 mins., is adapted from a novel by Eileen Pollack called Woman Walking Ahead: In Search of Caroline Weldon and Sitting Bull.  It tells the story of Caroline Weldon, a well-to-do widow and portrait painter from Brooklyn, who, in the late 1890’s, packed her paints and her trunk and made the long, arduous trip west to paint Chief Sitting Bull. (Woman Walks Ahead is the name Sitting Bull and the Lakota Sioux gave her.) Our government attempted to send her back—these were tense times with the Indians—but she meets Sitting Bull and stays, well, I don’t know where she stays for many of the scenes of them together are in his tent, or walking the range, etc.  One time, he changes clothes in front of her and there is tense music but that’s about it.  Their relationship is the major focus of the film. But if this film is trying to make a case for a more intimate relationship between the two of them, it fails . . . , dismally. Research shows that there was mutual respect and she became his confidante and secretary, but lover? A real stretch—besides, he already had 2 wives.

Weldon is played by Jessica Chastain, a fine actress, but wasted here. She dresses in prim ruffled day-dresses and shoes designed for the drawing room; hence, one can easily spot her in a crowd. One time, the director sits her on a big white stallion in her eastern garb, moving through a crowd. The scene made me think of Rembrandt’s Nightwatch in which he tucked his recently departed wife into the canvas. Her otherworldly figure enhances; Chastain just looks silly.

On the other hand, Sitting Bull played by Michael Greyeyes almost makes up for that.  I looked him up to find that he is a Canadian actor with a Master’s Degree in Theater from Kent State and an accomplished ballet dancer—a tall one at 6’2”.  When Caroline first meets this great Chief who brought down Custer, he’s wearing a beat-up floppy hat and old clothes and is on his knees digging up potatoes. This menial task along with his demeanor helped to quickly establish an aura of sadness and resignation combined with a dignity that he maintained throughout the film.

This is not a great film but it did send me into research mode. I needed to know more about Caroline Weldon. Alas, we were duped! No wonder Chastain was no more than a cardboard copy, she was mostly fiction. The real Caroline Weldon was born in Switzerland in 1844 and her name was Susanna Carolina Faesch. She moved with her mother to Brooklyn when she was a child. Her mother married a physician and when Caroline got older, she married a physician too. About 10 years into her marriage she ran away with a married man, had a son and when her lover returned to his wife—which happens more often than not, she had no choice but to move back with her mother. During this time, she got interested in the Indian Rights movement and when her mother died and left her a little inheritance, she changed her name to Caroline Weldon, took her son and went off to paint Chief Sitting Bull. Later, the two would have a falling out  and she would leave. She was on the Mississippi on her way to visit a cousin in Kansas City when he was killed—not, as we saw her in the film, being dragged away in tears. Sometime around this time, her son died and, in 1921, she would die alone in a small apartment in Brooklyn from candle wax burns. (I know, that does sound unlikely, but it was a hundred years ago.)

Hers is a sad story. We don’t know whether she ran away with a married man on impulse or if her marriage was so unhappy that she had to do something, but her actions, of course, would have destroyed her reputation. Even her son had to feel society’s rebuff—remember, it was the 1800’s. (Funny that men don’t seem to have that problem.} It is logical to assume that when she changed her name and started west with her son, she was hoping to start over, to leave that past behind. Her support of the Sioux and their plight is recorded. There just wasn’t anything left to do. The Senate had already passed the Dawes Act which gave the government the right to place the Indians on small reservations so they could send settlers to what would become North and South Dakota. She was too late, but she tried. She did what she could.

There’s a cemetery in Scotland on the North Sea with a grave tucked in near the wall that has the epitaph, ‘She did what she could’. Caroline Weldon made me think of it. She was brave; she was kind—even spending her meager fortune to help feed the Sioux, and she wanted to make a difference. She tried; she did what she could which is all we should expect from anyone.. She deserved better than this film.

I’m giving this film 2 carats, one for making us aware of Weldon. In fact, last year, after the film came out, Greenwood Cemetery in Brooklyn had a trolley tour in March during Women’s History Month called ‘Women who walked Ahead’ and featured Weldon’s grave. It likely wouldn’t have happened without the film.

The second carat is for making me think about Native Americans. . We don’t see much about them. Oh, there’s the Lone Ranger and Tonto but we have to think hard to come up with much else. They are our dirty linen. Did you know that our government even killed all the buffalo so the Sioux would lose their source of food and become dependent, easier to control?

By the way, Caroline Weldon painted 4 canvases of Sitting Bull. Two still exist – one is held by the North Dakota Historical Society in Bismarck, ND and the other at the Historic Arkansas Museum in Little Rock, Ark.  Go see them.